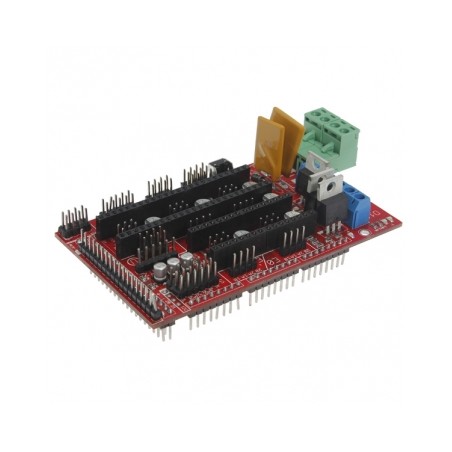 Ramps is a driver board designed for 3D printer, based on platform (firmware) Repap. It not only drivers four steppers so you can design many types of machines based on it, like CNC,  and as a mature platform specially for 3D printer,  it also driver extruder, fans, temperature sensors, SD card, etc.

It is designed to fit the entire electronics needed for a RepRap in one small package for low cost. RAMPS interfaces an Arduino Mega with its powerful platform and has plenty room for expansion. The modular design includes plug in stepper drivers and extruder control electronics on an Arduino Mega/Sainsmart MEGA shield for easy service, part replacement, upgrade-ability and expansion. Additionally, a number of Arduino expansion boards can be added to the system as long as the main RAMPS board is kept to the top of the stack.

The RAMPS 1.4 board is an upgrade to v1.3 as it  now uses surface mount LEDs, resistors, and capacitors.

This RAMPS 1.4 board is fully assembled. Including the power plug header shown in the picture.